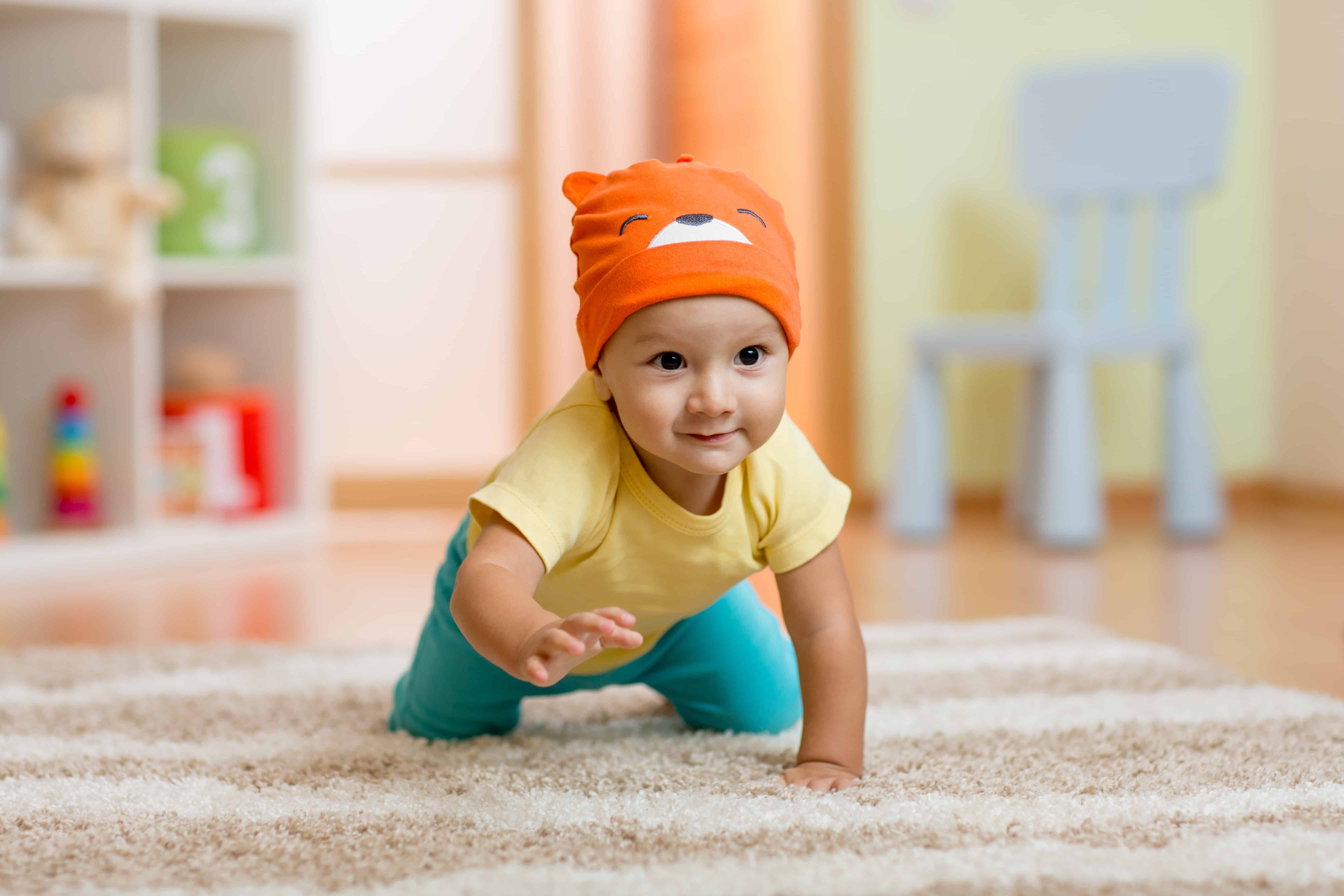 Crawling is a critical step in an infant’s brain development. Skipping crawling or not crawling for long enough can impact various cognitive processes. This can range from being unable to sit up straight, not holding a pencil correctly, hyperactivity and fidgeting and even dyslexia and learning disabilities.

Education professors, O’Dell and Cook at the University of Indianapolis found that in most instances children with ADHD and Learning Disabilities didn’t crawl for very long as infants. On average babies should crawl for around six months or more. Skipping crawling or only crawling for a short period of time can result in an immature Symmetric Tonic Neck Reflex (STNR).

The STNR reflex enables babies to use their upper body and lower body independently. It is what pushes babies to crawl and should diminish as they go through the crawling phase. The integration of this reflex means your child is able to sit still, focus, and learn well among so many other skills that are essential for learning success. Crawling for approximately six months ensures that your child can have independent control of their neck, arms and legs.

In one study conducted by Dr. Miriam Bender, it was found that 75 percent of children and adults with a learning disability had an immature symmetric tonic neck reflex  which was found to contribute to their disability.

Signs your child did not get enough crawling or has a retained STNR are:

Clinicians have noted that the retention of this reflex has skyrocketed in the last several decades. The invention of walkers, saucers, swings and other holders contribute to less tummy time for a baby, as does our fear of putting our babies on their tummies for fear of SIDS. Crawling is being skipped or occurring for less time because of this which results in the STNR reflex being retained.

How Crawling Builds a Brain

On a cognitive level crawling encourages the growth of neurons, as well as connections between the neurons. Because crawling is cross lateral, both hemispheres of the brain are developed and strengthened through this movement.

The more children crawl the more connections they build off previous connections on how to progress from an early, uncoordinated crawl that requires a high level of concentration to a movement that is more evolved and automatic.

As an infant challenges their brain by overcoming the limitations they currently have with crawling, their connections increase and their crawl develops even more until they reach mastery where they are now crawling smoothly on hands and knees, with feet dragging behind them, hands not changing places and hips centered without swaying. Mastery of these highly coordinated movements results in more organized connections in the brain.

In a nutshell this movement helps to develop complex cognitive processes that are necessary for later higher level learning like planning, focus, concentration and memory.

Memory flexibility was once assumed to be related to the age of the infant but research is showing it has more to do with brain development initiated through mastery of certain coordinated movements. Research was conducted on both children who were crawling and were not crawling with the goal to teach all of the children a new skill and see how well both groups remembered the skill in both the same environment and a new one.

Since both sides of the body must work simultaneously on separate motions, crawling requires the two sides of the brain to work together. This communication occurs through the brain’s superhighway known as the corpus callosum, which is a band of fiber between the two hemispheres. Communication between these two brain hemispheres becomes optimal as the corpus callosum becomes thicker with the more cross lateral movement that occurs.

It’s not uncommon for children with ADHD and dyslexia to have multiple diagnoses like dyspraxia and dysgraphia. One reason is because crawling demands that a child develop both fine and gross motor skills like balance, hand-eye coordination as well as cross lateral coordination (when one side of the body does the opposite of the other side like lifting the right arm while bring down the left arm). If these skills are not developed well then there can be mild to severe challenges with everything from throwing a ball, writing neatly, reading fluently and even clumsiness.

Crawling develops binocular vision as it trains a baby’s eyes to look into the distance and then to return their vision back to their hands. Children use binocular vision throughout the day at school when they copy notes or information from a board or smart board and then turn to their own work at their desk.

Visual processing in general is developed though crawling as the hand becomes the guide for them to visually decide where to go. A baby must use visual processing to determine where he or she wants to go. The eyes and hands must work together to be able to move towards their goal. Poor hand-eye coordination is often present when there are issues with reading, letter reversals and writing difficulties.

It’s Not Too Late!

Not all children who don’t crawl will have difficulties but since it’s becoming increasingly clear that not crawling for long enough puts  a child at risk, it is wise to encourage infants to crawl. This can be achieved simply by putting your baby on his or her tummy more often and playing games that encourage them to move from one place to another.

If your child did not crawl–don’t stress! There is plenty you can do to integrate the STNR reflex and any other reflexes that may still be retained and may be preventing your child from tapping into their full potential. 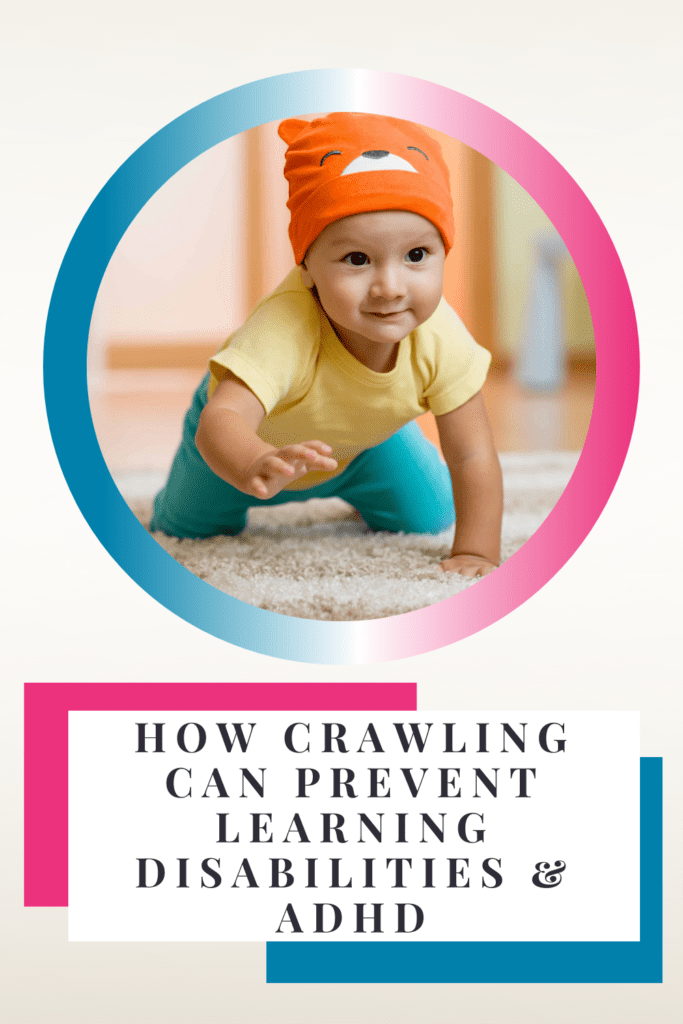